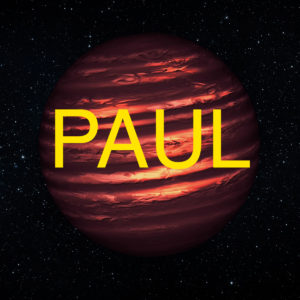 Paul is a former promoter of the Planet X conspiracy theory, which is also known as the Nibiru cataclysm. Planet X (or Nibiru) is a supposed rogue planet that some people claim they can observe near the sun. Supposedly the existence of this planet is being covered up by the government because it’s about to cause the end of the world. There’s a wide variety of versions of this theory.

Paul discovered the Planet X theory back in 2013 and became very interested in it. He started posting lots of YouTube videos promoting the theory and warning of the impending apocalypse. He teamed up with two other people, and they created lots of YouTube content as a team. For a long time he simply ignored all attempts by “debunkers” to explain things to him, but eventually he recognized that the weight of the evidence was against him. This realization came about in large part due to the efforts of one debunker who posts on YouTube and Facebook as “Dazza the Cameraman.” Dazza would patiently and politely explain things to Paul.

Paul eventually lost his belief in Planet X and split with his YouTube partners, who immediately branded him a traitor, all of which was very difficult for him. He’s now moving on with his life and leaving conspiracy theories behind, but he contacted me because he wanted his story to be told.

“Paul” is not his real name, his voice is altered, and he does not appear in the YouTube version. While anonymity is difficult to keep on the internet, Paul did not want any more footage of himself out there that could be used directly against him, so he’s appearing here relatively incognito.

Dazza The Cameraman’s sites have lots of great debunking of Planet X, and Flat Earth: